When talking about lifetime cashflow, clients often say: “I need loads of money in case I need long-term care.”

It’s one of the main concerns people express.

But should they be worried?

For one thing, the chance you will need long-term care is lower than you might think.

For another, when you own your home (as most of our clients do), those bricks and mortar are your ‘bank of long-term care’, just in case you do ever need it.

Although we all know someone who’s the exception to the rule, the good news is that the fear of needing long-term care is overblown.

These are the stats according to Age UK’s Later Life report April 2018:

That means the chance that you’ll have fork out a fortune for long-term care is relatively low, because you’re not likely to need it in the first place. Even if you do, you won’t need it for long (cheery thought). And, if you do run out of money, the local authority will step in to help pay for it.

Busting the myth of retirement spending

I read a excellent book for financial planners recently. It’s by Abraham Okusanya, and called Beyond the 4% rule.

In a chapter about ‘Busting the myth of U-shaped retirement spending’, he says that most people think initial spending goes up when you retire and enjoy your new-found freedom, then drops as you become less active, then rushes up when you need long-term care, as shown below. But they’re wrong. (We’re paraphrasing, of course.) Because this model fails to take the evidence above into account, in that most people won’t need long-term care at all. 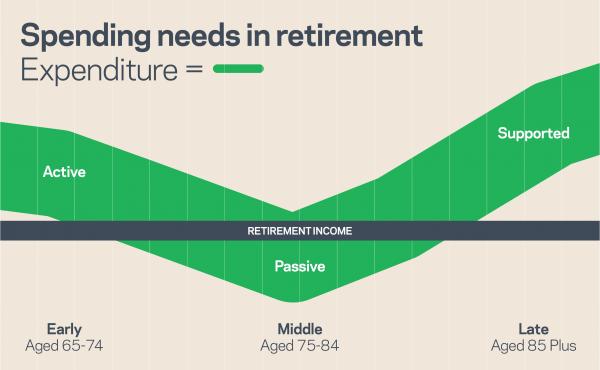 What’s more, Okusanya quotes a US study that found spending decreases by 1% per year throughout retirement. UK research by Dr Brancati and colleagues at the International Longevity Center also shows that older people spend progressively less on living costs and food as they age. In fact, consumption costs reduce by 35% from age 65 to 80. It seems, towards the end of life, everyone spends less on non-essential items. The trend was the same for high-income and low-income groups, and across the range from frugal to extravagant spenders. 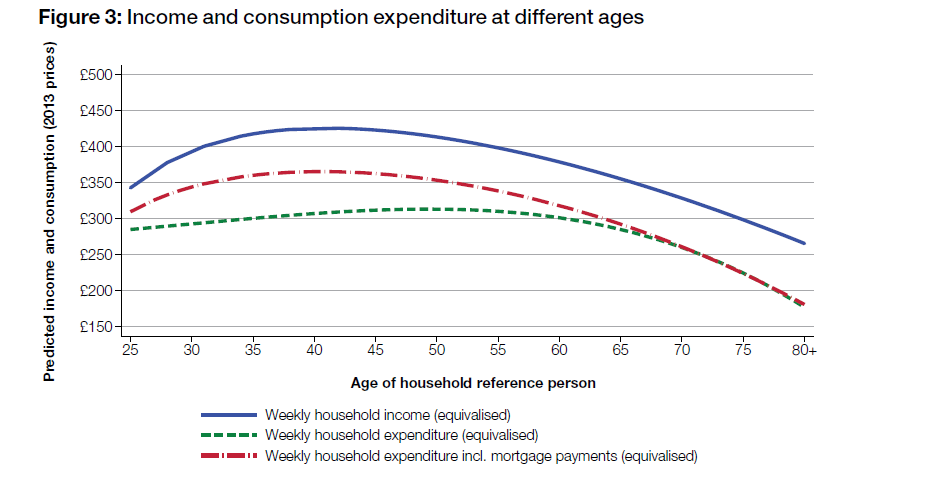 The falling consumption results in increased savings. According to the report:

Disclaimer: As you know, we like quoting research studies, because all our investment advice is based on scientific evidence. But we noted that the Brancati data is taken from people still living in private households, and excludes anyone in a self-funded care home. Their graph shows consumption costs, not all expenditure. So it doesn’t show any uptick in care costs (in the rare cases where they apply). Of course, if you are in a care home, your expenses probably only include things like hairdressing, chiropody and the occasional gift. That means all your other spending falls off a cliff, just like the graph.

If you’ve got capital, you can dip into that to pay for your care. If you own property, you can always sell your house. Why shouldn’t you? That might be a bit of a bombshell statement, but many people believe it’s right and proper.

Once your remaining capital and savings fall to £23,250, the local authority will step in and help pay. If you have just £14,250 remaining, you’ll be entitled to maximum local authority support.

Those are the current limits at the time of writing, although the Conservatives have suggested an alternative so that your home doesn’t have to be sold – They propose that the local authority would take a charge over it (while protecting £100K of its value for your descendants). Accrued care fees would eventually be taken out of your estate on death. We don’t know if/when/whether this plan will ever come to fruition.

What this means to you

Admittedly, the ability to pay for long-term care can be a worry, but the fear is possibly overblown.

Paying for long-term care is one of the financial planning scenarios we take care of. We will build an income withdrawal strategy that is consistent with the most likely changes in retirement spending – based on empirical evidence, not panic.