Ageing isn’t what it used to be

On average, people are living longer, healthier lives than in the past.

The Friendly Societies Act (1875) said ‘old’ started at age 50 in Britain. More recently, the UN has referred to ‘old’ as starting from age 60. However, World Health Organisation research has defined new criteria according to average health quality and life expectancy:

We’re currently living in a culture that values youth, so this is great news for those of us who are still considered ‘young’!

You might not like the idea of retirement (we don’t, we prefer to call it ‘financial independence’), but the data shows you are likely to live a long time after you stop earning money.

“In this world nothing can be said to be certain, except death and taxes” (Benjamin Franklin, 1879)

The trouble is that no individual can possibly know exactly when they are going to die.

When the State Pension was introduced in 1948, a 65-year-old could expect to live for another 13.5 years. They would, therefore, receive a pension for around 23% of their adult life.

UK life expectancy is currently around 79 years for men and 82 for women, although this is expected to rise as medicine and healthcare continue to improve.

How much will you need?

Even if your mortgage is paid off by the time you stop working, you’ll still have bills to pay, you’ll probably want to go on holiday now and again, and you may wish to buy occasional presents for friends and family as well as regular clothes and food and heating for yourself. You might even want to pay the deposit to help your offspring (or theirs) get onto the property ladder.

In 2018, Which? magazine asked 6,000 retired and semi-retired members about their spending (after tax). They found three levels:

Note that people living alone spent around 25% less than a couple. To afford the top-level lifestyle for 23 years, your pension pot(s) need to total £550,000. This assumes both members of a couple receive the full State Pension and opt for income drawdown rather than an annuity.

While you are still working, there’s time to save for your pension. As soon as you stop working, you start drawing money down rather than putting more in.

Planning for a comfortable retirement

Saving for your pension? Of course, we can help. In fact, we went to a conference recently about the Science of Retirement. The day was packed with ideas for advisors who talk about retirement issues. It was hosted by Abraham Okusanya of Finaltyiq (we’ve mentioned him before), and you can get a flavour of the event in this brief video. 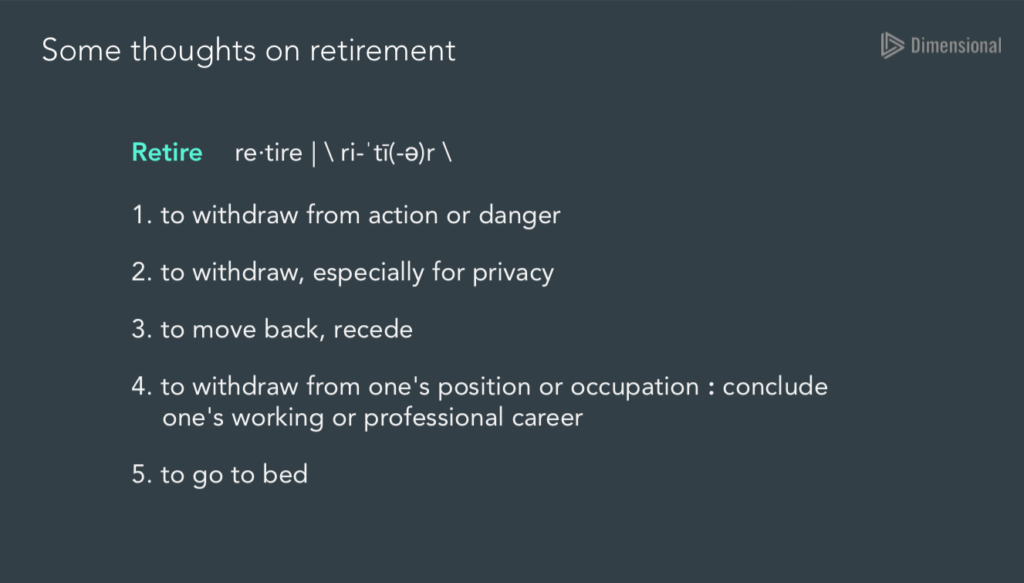 With that in mind, we are now retiring to bed for a good long snooze.

P.S. For more on this subject, you might like to read (or re-read) last month’s article Pension myths & misconceptions