Darren and his friends went on a camping holiday to West Wittering. The group included 15 adults, four children, and two dogs. They had lots of fun playing with their powerful long-range water pistols.

A troop of Scouts was camped in the opposite corner of the site. They also had water pistols, but only the short-range versions.

Darren noticed that one of the Scouts was bullying all the others.

Spotting the bully alone outside the Scout tents, Darren hatched a plan. He and all his friends, plus children and dogs, ran down the field, surrounded the bully, and soaked him from a long distance with their water pistols. The bully tried to squirt them back, but his pitiful water pistol didn’t reach. Hearing the commotion, the other Scouts popped their heads out of their tent flaps to watch, and roared with laughter at the retaliation.

You might wonder what this (true) story has to do with investment?!

Well, it’s intended to remind you to stick to your guns even when times are tough. If you depended on the news media, you would think the year just gone was a disaster, with China collapsing and nothing but bad news.

It’s true that 2015 was more volatile than we have been used to, as shown in this graph. However, the data shows it is just short-term as shown in the graph below. 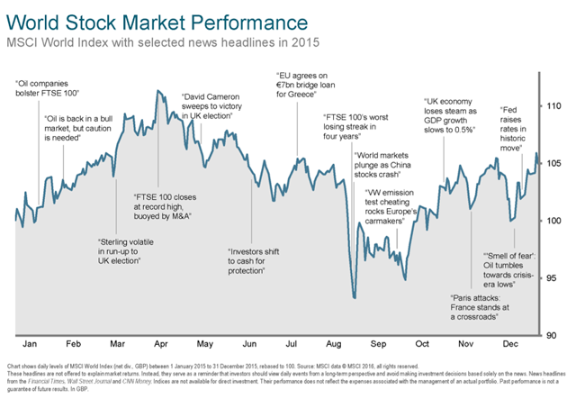 After years of seemingly uninterrupted growth, many markets reached record highs in April, but fell dramatically in August.

Knowing that the issue is out there, we wondered if our clients might be worried – however, no one has phoned us in a panic, so perhaps our constant messages of reassurance have got through.

Putting 2015 into context, you can see that – in spite of concerns – global equity markets have enjoyed strong returns since the financial crisis of 2008/9.

Investors have enjoyed positive returns despite the 1970s crisis, Black Monday, Black Wednesday, wars, currency crises, bubbles, and crashes. With investment, you are rewarded for remaining for the long-term. Therefore, our advice remains stick with your plan, stay diversified, and stay disciplined. Maybe even buy a bigger water pistol!