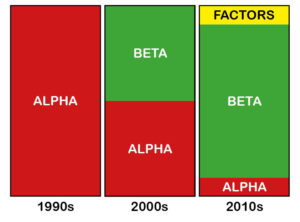 The theory of what impacts investment returns has changed over recent years, as shown in the diagram on the right.

Back in the 1990s, it was believed that investment returns depended solely on the fund manager and their skill at outperforming the market – returns known as ‘Alpha’. Investors hoped to identify a good fund manager by checking their past performance.

In the 2000s, smart investors realised that much of the return was based on the market as a whole, irrespective of the fund manager themselves – this became known as ‘Beta’. The exact ratio evolved over time, so in the diagram, we’ve split it 50:50.

During the current decade, it has become apparent from academic research that the skill of any individual fund manager accounts for only 10% of the return. The majority is Beta. And the new chunk that’s been identified includes Factors such as smaller companies and value companies.

Active funds look to return Alpha – the contribution the fund manager makes over and above Beta and Factors. The problem for investors is that Alpha accounts for the highest element of the costs, while being responsible for the smallest element of the return.

You need to ask whether your gross anticipated Alpha is sufficient to cover the cost over and above the Beta that you’d get anyway.

As we keep banging on about, costs matter! They have the biggest impact on the return you achieve. For more on this, please see our previous articles:

This at-a-glance explanation was inspired by Vanguard – they are one of the fund managers we use, chosen after much research and due diligence working alongside our Trivium partners.

Their basic UK tracker fund has an ongoing charge of only 0.08% – that’s a teeny tiny fee!

We’re not the only people flying the flag for Vanguard.

In January, it was reported that Vanguard has broken its own record as the world’s fastest-growing asset manager for a sixth successive year after pulling in more than $1bn of new business each day throughout 2017.

In April last year, the New York Times reported that Vanguard is growing faster than all its competitors combined. Since 2009, Vanguard has expanded from about $1 trillion in assets under management to almost $5 trillion.

The secret of their success

Here are some of Vanguard’s core strengths as identified by Barry Ritholtz at Bloomberg last October:

As with all our articles, we hope this gives you confidence that we know what we’re talking about, and can be trusted with your investments. Just give us a call to find out more.