Don and Jane are in their 80s. They have four children and seven grand-children. They also have a house worth about £1m and considerable investments, including a family trust.

They’re proud to have a substantial amount they can bequeath to their descendants. But they’re aware the taxman will get a greater percentage than any of their offspring – and they are not particularly happy about that. Neither are the children! 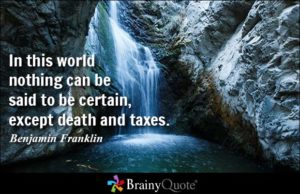 This quote is usually attributed to Benjamin Franklin, who wrote in a 1789 letter that “Our new Constitution is now established, and has an appearance that promises permanency; but in this world nothing can be said to be certain, except death and taxes.” However, The Yale Book of Quotations quotes “‘Tis impossible to be sure of any thing but Death and Taxes,” from Christopher Bullock, The Cobler of Preston (1716). The YBQ also quotes “Death and Taxes, they are certain,” from Edward Ward, The Dancing Devils (1724).

In the 2015/16 tax year, HMRC collected £4.7 billion in IHT. On average, IHT receipts have increased by 12% year-on-year since 2009/10, mainly due to rising house prices surpassing the frozen nil rate band, and to a buoyant stock market. The Office for Budget Responsibility (OBR) estimates that IHT receipts will rise to £6.2 billion by 2022.

The three biggest elements of death estates in the UK are residential property, securities and cash.

In an effort to reduce the burden for families where soaring property prices have brought them within the scope of IHT, the Government introduced a new allowance from April 2017, on top of the usual nil rate band (currently £325,000).

The Residence Nil Rate Band (RNRB) means that each individual can claim an additional allowance to offset the value of their family home. The band begins at £100,000 rising by £25,000 each year to reach £175,000 by tax year 2020/21. However, the rules and caveats mean that only about 0.04% of the population of England and Wales will benefit.

The easiest way to mitigate inheritance tax is to spend your money now! Alternatively, you can give it away – but you must survive seven years.

What if you would rather retain control, access your wealth in case of need, or are not confident of surviving another seven years?

How to have your cake and eat it too

There are two little-known ways to remove the value of an investment from your estate after just two years:

Please note that IHT relief is not guaranteed, because HMRC will decide whether or not an asset qualifies for BR only when the investor dies. If the investment has been held for at least two years, and HMRC agree that it qualifies, the value can be passed to the deceased’s beneficiaries free of IHT.

P.S. Don and Jane are made-up names based on a real situation. For a real-life case study, you might like to read this PDF