Holding investments in many different countries broadens the potential opportunities available to you and can help reduce the overall risk of your investments. Global diversification is an important consideration when we construct investment portfolios, and last year, like most years, was a good example of why.

Although the UK economy was one of the strongest in the developed world in 2014, the UK stock market returned just 1.2%. The MSCI World Index returned 12.1%.

News headlines can paint an inaccurate picture of the effect world events have on stock market returns because they do not provide perspective. Russia and Greece hit the headlines in 2014 and, for different reasons, caused some concerns for investors. Both markets fell in 2014, Russia by 42.5% and Greece by 36.2%.

But neither fall would have made a significant contribution to the overall performance of a globally diversified portfolio because both markets are relatively small. To give this some perspective, Apple, the world’s most valuable listed company, is worth more than three times Russia and Greece combined.

You might ask, “Which countries should I own?” The simple answer is “all of them”, or as many as practically possible, as it is impossible to predict which will do the best over any given period of time.

Who would have predicted, for example, that Denmark would be the best performing developed market over the past 20 years? That market, representing around 0.5% of the world, returned an average of 12.3% per year compared to the developed market average of 7.6%. This point is colourfully illustrated in the image below, which we call “The Randomness of Returns.”

The table ranks historical annual stock market performance in sterling for different developed and emerging markets from highest to lowest in each year. Each colour corresponds to a different country, and the patchwork dispersion of colours shows no predictable pattern in either the developed or emerging markets. 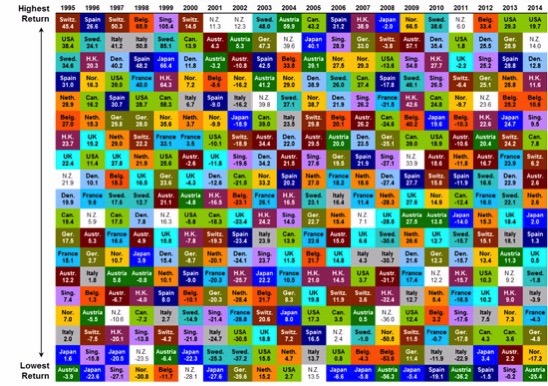