Years ago, Nicky stopped over in Singapore on her way to visit family in Australia. On the first night, the tour guide issued a dire warning: “You might think it’s safe to leave your front door open at home, but here you have to be more careful. For instance, don’t leave your handbag on the counter when you shop, as someone might reach in and take your purse.”

At first, Nicky was worried. Then she remembered she lived in London, was always very security conscious, and never left her handbag unattended anyway. She relaxed and had an amazing holiday, untouched by even a sniff of crime.

Is your pension safe?

These days, unscrupulous crooks are less likely to pick your pocket or mug you on the street. But they are more likely to use technology to scam you, steal your identity or hack into your accounts.

For example, because of confusion around the new pension freedoms, skilled fraudsters are currently trying to persuade people to:

According to the FCA, £1.2bn is lost in UK investment scams every year.

According to Adviser Business Review in November 2016, an estimated 10.9m UK consumers have received unsolicited contact about their pension since April 2015.

According to MetLife, the percentage of people targeted by pension fraudsters in the South East was slightly higher than the national average, at 10%.

Would you be fooled?

Unfortunately, fraudsters appear articulate and financially knowledgeable. They have professional-looking websites and marketing materials, with credible testimonials. Even before the new pension freedoms were launched, the FCA had to shut down a ‘lookalike’ website that had been trying to pass itself off as the Government’s PensionWise site.

According to CAB research, 76% of 2,000 consumers were confident they could spot a scam.

Try this test. Before you scroll down to see the answer at the end of this article, which of these ads would you choose to contact? 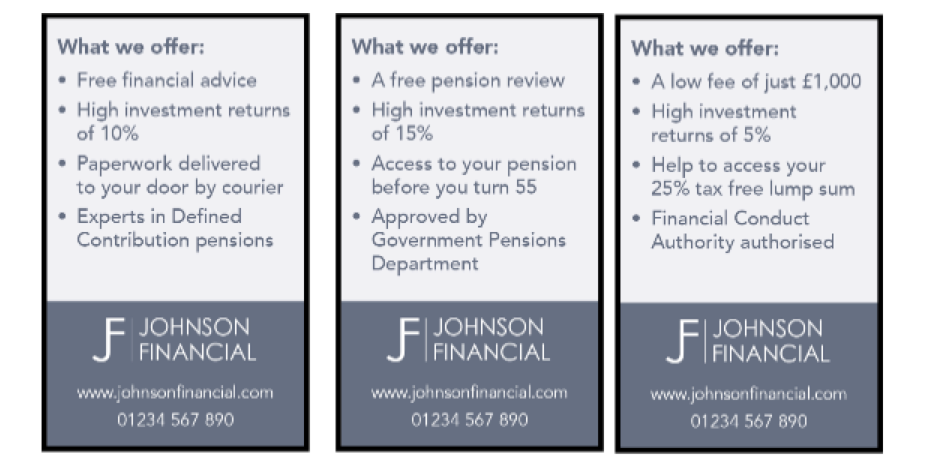 So what’s being done to stop the scammers?

The UK Government is considering:

The Government is also considering whether to extend these proposals to include emails and text messages.

It may be nearly one-twelfth of the way through 2017, but it’s not too late to make a new year’s resolution.

Here are some sensible ways to avoid losing your hard-earned savings:

For more information, check out:

This has been a public service announcement, brought to you by the lovely people at Plan 100.

Now compare your choice with the CAB survey results:

Did you get taken in?